Home » Resources » Frequently Asked Questions » Can the Police Search Your Car Without a Warrant?

Whether you’re in Los Angeles or traveling anywhere in the U.S., you are protected by the Fourth Amendment against unjustified searches. Despite this protection, there are several methods available to the police to be able to search your car without a warrant.

Still, an improper search of your car may be grounds to make evidence inadmissible in court. If evidence becomes suppressed by an illegal search or seizure, you may be eligible for a better plea agreement or even outright dismissal of your charges. 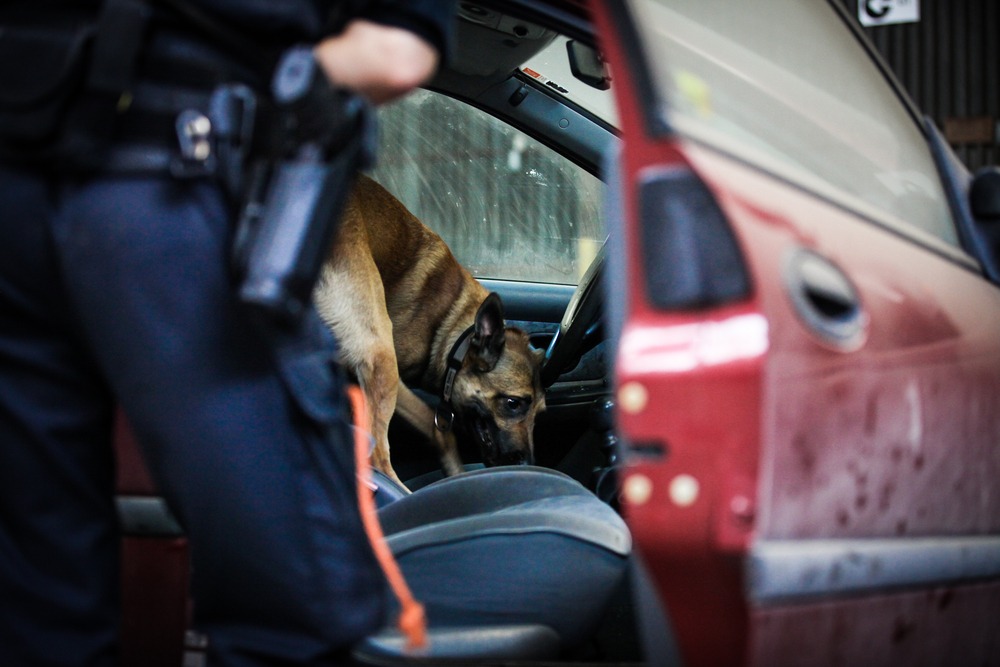 A police officer and a dog search a vehicle. The police can search your car without a warrant under specific circumstances.

How the Fourth Amendment Applies

The Fourth Amendment grants all Americans the freedom from unreasonable search and seizure. In essence, the police can only search your property if they have a warrant to do so. Unfortunately, despite this protection granted to you by the federal government, law enforcement still has ways and loopholes around it to search your car.

Method 1: As Part of an Arrest

An officer stops an individual because they have a reasonable suspicion that they may have committed a crime. After they have stopped the person and conducted an initial investigation, they may feel they have sufficient justification, known as probable cause, to arrest the individual for a crime.

Once the arrest has taken place, the officer has some right to conduct a search of the arrested individual. This means they may perform a more intrusive search of the person than would be completed during a Terry stop.

Probable cause is a recognized level of suspicion that requires more justification than reasonable suspicion. The officer must articulate specific facts about a situation that would make it seem appropriate to the average person that their search is justifiable.

An officer witnessing a driver tossing an open can of beer out of their window may not have enough information to have probable cause for a DUI arrest but has evidence of littering and reasonable suspicion of DUI.

However, suppose they pull the driver over and find other open containers of alcohol, and the individual smells strongly of alcohol. In that case, the officer may then have probable cause to initiate a DUI arrest.

Under these circumstances, the officer may conduct a full search of the car. In addition, since the clarification of California v. Acevedo, police are also authorized to search locked containers within the vehicle.

When an individual gets arrested, their vehicle may get impounded. Once the vehicle gets impounded, officers are required to take an inventory of the car. This type of search does not require a warrant but does allow the officers to use anything found in the car as evidence in a criminal proceeding against the vehicle owner.

Officers also may seek the driver’s consent to search a car without a warrant. If the driver gives consent, the officer can search the car as thoroughly as if they had received a warrant.

Police do not always ask for consent straightforwardly. They may ask in a way that isn’t clear. They may also try and pressure you, suggesting that a search would be okay if you didn’t have anything to hide.

Calmly asserting your right to refuse a search is not sufficient grounds to give the officer probable cause to search your vehicle.

One thing you should know is that even though the Fourth Amendment entitles you to privacy, many California courts still side with the police. Many judges tend to air on the belief that a car is a place where individuals expect to have a lower sense or expectation of privacy.

Thus, any evidence from an unwarranted search can still get admitted into court. When this happens, you aren’t completely powerless. You have options available under the law to fight back against improper searches.

Getting Assistance With Improper Searches

If there is a reason to suspect that evidence was obtained improperly, you can file to have the evidence suppressed. Suppressing evidence may:

If an officer searched your vehicle improperly, the evidence may be inadmissible in court under the exclusionary rule.

Can a Lawyer Help Me?

If your car was searched without proper reason, you can fight to have the evidence removed. An experienced Los Angeles DUI lawyer can help you move to dismiss the evidence submitted by the police due to an improper search. Don’t hesitate to get help with your case and contact an attorney today. Getting a Lawyer, How to Fight a DUI,
Why should I not just plead guilty and move on with my life? Why is it a good idea to consult with an attorney? Continue Reading » General,
Can You Drive for Uber With a DUI? Continue Reading » General,
What motivates you to want to help people in a DUI Case? Continue Reading »
Menu